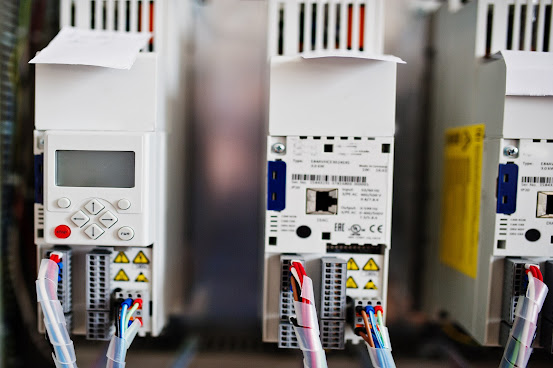 Unplanned downtime and network failures are one of the major triggers of lost productivity, causing delays, unhappy customers, and a loss of revenue. No matter what the industry, if a switch, connector, or network cable should fail, replacing these components represents only a fraction of the costs associated with production downtime. Therefore, reliable network infrastructure is critical to ensuring optimal network performance.

The daisy-chained network has one inherent flaw: if any link between any two devices fails, the entire network will go down. Daisy-chained PROFIBUS DP networks are more susceptible to breakdowns since one faulty device can affect the entire segment resulting in complete network failure.

The introduction of a ProfiHub B5+R in a daisy-chained network helps to isolate devices to specific channels, so if a fault arises in one of these channels, it does not affect the entire network. This greatly simplifies fault-finding and as a result, reduces downtime.

An MCC based in a South African mine contacted IDX to investigate consistent network issues they were experiencing, such as intermittent bus communication failures. Upon examining the system, our IDX engineers discovered that one device was falling off the bus, and as a result, every device connected to the bus was affected, causing communication failure. These issues were due to a faulty device, which was connected in a line topology.

In addition, due to the design of the network and the industry, the MCC experienced a large amount of electromagnetic interference (EMI), caused by incorrectly wired devices, faulty connectors, and PROFIBUS cabling not properly being grounded. There were also incorrect terminations within the network, causing an impedance mismatch by creating unnecessary additional resistance (over terminations) in some segments and a lack of resistance in other segments (under terminations). These issues resulted in intermittent network failures, increased downtime, and loss of revenue due to affected plant production.

We installed a PROFIBUS B5+R to re-segment the network devices into multiple channels as opposed to the existing one, isolating the problematic devices into their own channel. By re-segmenting the network, IDX engineers created a star topology as a posed to the existing line topology, which reduced downtime, simplified fault-finding and created additional transparency within the network as the ProfiHub has LED diagnostics, clearly indicating if a specific segment is experiencing a bus fault, if the termination is on or off, and if it’s in data exchange.

IDX followed best practices by re-segmenting the devices in this network, and this resulted in close to zero downtime after the installation.

Current topology – Line topology with multiple repeaters, this creates a high-risk network environment as the entire network can be dropped by any faults experienced within the segments 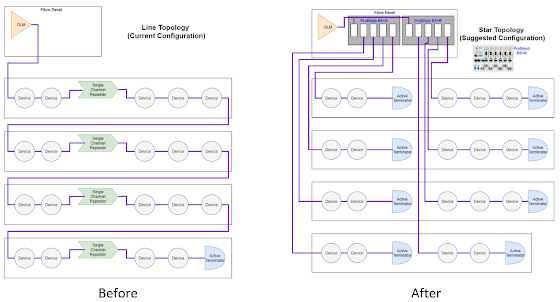 The ProfiHub B5+R is a DIN rail mount multi-channel repeater with five galvanically isolated channels. Each ProfiHub has 6 channels, one for the incoming communication, and 5 for the outgoing communication. This robust network component is used to design reliable, flexible and object-oriented networks. It allows for wide-ranging star or tree topologies and longer spur lines for PROFIBUS DP installations in IP20 environments.

This device is essential to obtain better control during the maintenance of a network as it makes fault finding less time consuming by indicating failed channels with an error light on the corresponding channel.

A ProfiHub B5+R allows for a maximum of 31 devices in a channel with a maximum total of 125 devices, but it is advisable to stick to a maximum of 24 devices per channel to ensure optimal performance. As an economic solution, the B5+R saves costs through the reduction of traditional PROFIBUS repeaters, reduction of downtime and the simplification of fault-finding.

The shift from reactive and preventive maintenance to proactive and predictive maintenance should be the direction that businesses strategise in. Based on the condition-based monitoring technology, the traditional fail-and-fix practice should eventually be replaced by the new predict-and-prevent paradigm.

At Industrial Data Xchange, we offer extensive expertise in industrial maintenance and asset management, with a focus on keeping your plant operating at peak performance. Our qualified site services team provide on-site preventive and predictive maintenance for improved asset health.  Speak to one of our engineers today if you’d like to know more about the ProfiHub and how it can help you.